In the most high and palmy state of Rome,
A little ere the mightiest Julius fell,
The graves stood tenantless and the sheeted dead
Did squeak and gibber in the Roman streets.

(Please note: There is an obvious distinction which many should keep in mind. It is the difference between being fooled and being a fool. One should always be able to discriminate accordingly.)

Sometimes nationwide political issues have the unintended consequence of revealing the state of the public mind. Often, what one sees when the mask as been removed, is less than pleasant.

Consider the ‘brexit’ vote. It would be quite natural to ask why those who, after the result they wanted failed to come in, demanded, immediately after the people had voted, a ‘people’s’ vote.

What was their original ‘remain’ vote in the referendum meant to represent? It certainly wasn’t their belief in the democratic process and principle. END_OF_DOCUMENT_TOKEN_TO_BE_REPLACED

And the winners are: the Swedes.

They didn’t do lockdown.

They just made sure their health service was prepared for any pandemic, with enough beds, PPE, ventilators and other necessary equipment.

When the virus hit, they simply told their people to wash their hands frequently, and try to keep a reasonable social distance in public places.

They’ve gone past their peak infection and deaths point, and their ‘R’ (reinfection rate) is well below the crucial 1.

The gloomy Eeyore, professor Neil Ferguson, who pushes the medical model the British government is following, and who has more than two decades of flawed, consistently wrong, hysterically over-reacting forecasts behind him, predicted that Sweden would have an ‘R’ of 4 at least, and many more times the death rate than it actually has.

Studies are now showing that herd immunity is achieved when as little as 10-20% of the population has been infected, not the 60-80% minimum that Ferguson has touted. Once you’ve got that 10-20% you’re well past the peak of infections and deaths. The ‘R’ rate goes below 1. Our ‘R’ figure is below 1, at just over 0.8%, and we’ve almost certainly got that 10-20% rate.

As the pandemic unfurled, I had thought that the South Korean model was the best one. Swift lockdown, closed borders, quarantining, efficient testing and contact tracing.

But it turns out that the Swedes offered the best solution. Their secret? As a Swedish government spokesman said, it was ‘common sense.’ They’d seen the evidence. They knew that it did not show that lockdown had appreciably more effect than simple washing of hands and social distancing. Lockdown wasn’t worth the economic and social harm it entailed. The Swedish government refused to be panicked.

Meanwhile, the ill-prepared British government did panic. Driven by perceived public reaction and the apocalyptic nonsense spouting from Ferguson, Ministers have run around like headless chickens.

The very severe lockdown imposed on us will do huge economic and social damage, albeit we’ve found some personal and environmental mitigating factors.

But professor Neil Ferguson deserves the title of The Man Who Wrecked Britain.

I couldn’t help but laugh when I read about the Lib Dum councillor who was fasting ‘in solidarity’ with muslims for Ramadan.

I suspect he hadn’t thought much about it because – in a piece of Twitter gold – he shared a picture of the eggs and bacon he was eating at sunrise.

That’s about how far ‘in solidarity’ with muslims he really is.

What made it even funnier was his lame excuses. He was half asleep. His food choices were limited due to allergies. Poor baby.

I can’t wait for LGBT week.

Perhaps he’ll tweet a photo of himself sucking the cock of the guy who bones his missus. 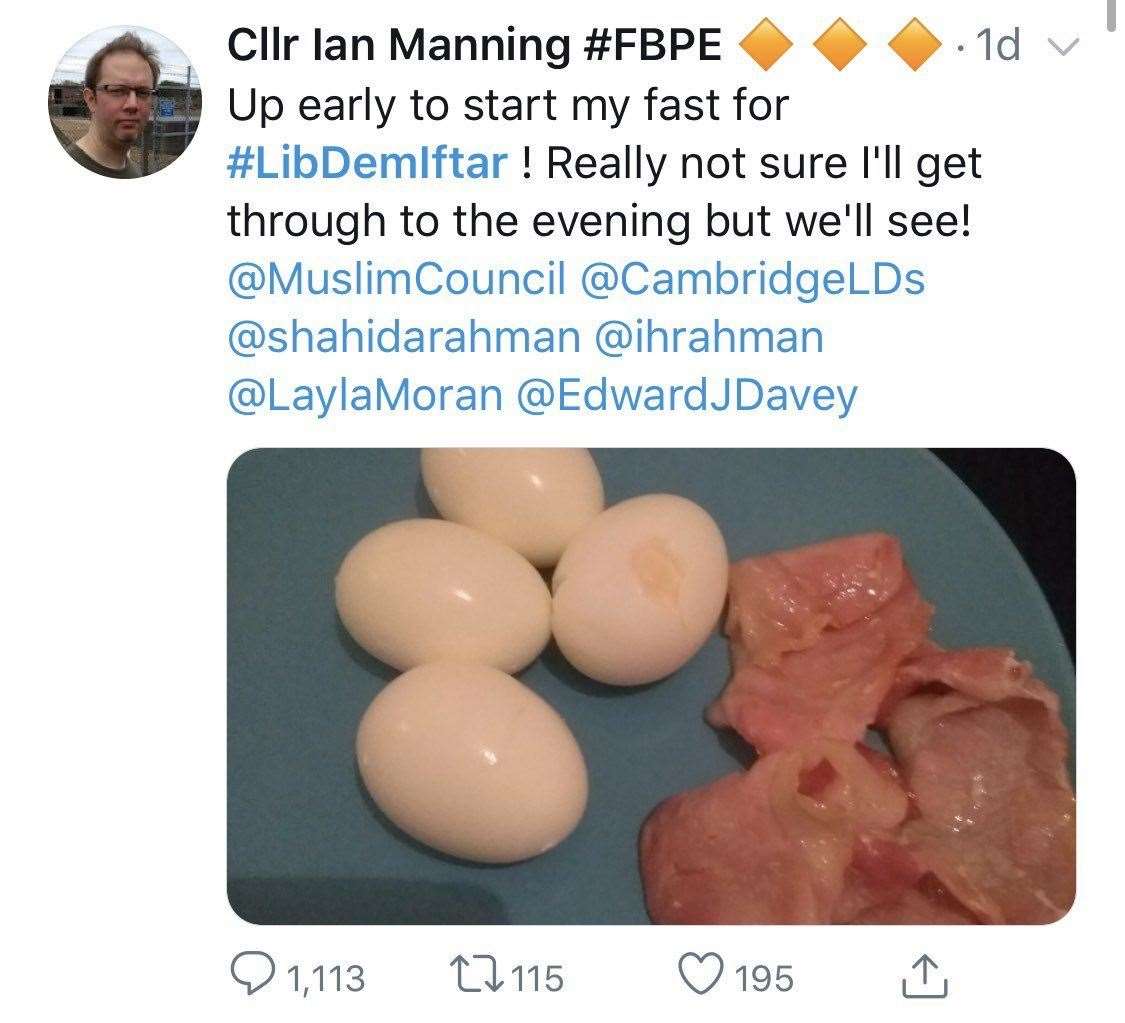 It wasn’t so long ago that Sajid David was made Home Secretary. He posed for a photo-op in front of the Home Office with his legs weirdly far apart. It was some sort of ‘power stance’. The idea is that standing as if you’ve just a sensitive operation projects power and authority.

Obviously it doesn’t: it just makes the person doing it look like an idiot.

The question I asked myself when I saw this is: why do these politicians fall for this crap? It seems obvious to me that some witty academic person has advised standing this way, and done so whilst holding a very straight face. I imagine a drinking-gang of academics laughing at who can get the politician to do the next stupidest thing.

But then maybe the academic actually believed it? I hope it is a sort-of ‘in-joke’ among academics. If it’s not we could all be in trouble.

The political class, if they can’t see through the ‘power-stance’, are possibly not the best persons to be dealing with the corona-crisis.

Never underestimate the stupidity of those in charge.

The video doing the rounds, is of a young man being stopped by a P.C in Accrington. Luckily, the phone camera was on, as the youth is told he will be arrested, then that plod can “make anything up, you won’t be believed”. The day that anyone put veracity in Old Bill has long passed. The ethnic identity of the P.C is now being discussed. Not 100% Anglo Saxon anyway. One wonders what his badge number and name are? Viva Lancashire.

I’m officially sick of hearing calls for footballers to take pay cuts and Cornish persons slagging off Gordon Ramsay for daring to occupy his own house.

One ‘local’ said that Ramsay could have ‘brought the virus to Cornwall’. I suppose this is true. Ramsay and god knows who else.

These humans are simply jealous of the rich.

Taking a pay cut isn’t going to help, unless having the country further reduce its tax revenue helps prevent virus infection, which it doesn’t.

It’s crazy. While the government loses billions in VAT it’s thought losing even more in income tax might help.

Jealousy never wears its own clothes. It’s always in disguise.

Can we please stop using war-time language during this flu-pandemic? Nobody who works for the NHS or is a police-person is on any ‘front-line’. There is no front-line.

There is no such thing as a ‘front-line police officer’.

The hospitals which have sprung-up about the place are not field hospitals.

This kind of talk lends a grandiosity which is is, as best, misplaced; at it’s worst it’s stealing valour from those who really knew what a frontline was.

I have not ‘clapped’ for the NHS, nor will I. I can’t bear the groupthink and herd-behaviour which we are seeing now – even if it’s well-meaning. Not since Diana was killed in that car-crash in 1997 have the plebmass been so enthusiastic about advertising their herd-membership credentials.

Now we have neighbour denouncing neighbour for leaving theire houses too often. What is it about the conformist mind which reacts with puce-faced anger to one who chooses not to conform? What is the thing such a person is truly angry about?

I suspect such a person is genuinely self-hating.

I walked along the sea-front earlier this afternoon. The road was deserted but the sea-front pavement – a nice wide walkway between the deserted road and the sea-wall – had a few dozen persons out and about, minding their own business. There were one or two joggers.

Two police officers were driving up and down the pavement, doing nothing of use whatsoever. I’m no lawyer but I’m guessing this is illegal.

I was amazed to see this. I know this is a ‘national crisis’ – or whatever – but shouldn’t those two officers have been busy patrolling Twitter for ‘hate-speech’ or picking their outfits for the next parade?

With all the new powers they have, why aren’t Old Bill arresting the Covid 19 virus? It is not all bad news, Bozza is stricken and Norwich are to be demoted from the Premiership.

Now excuse me as I giggle over clips of police sending drones to check on errant motorists.

Have we not gone a little bit overboard on Caroline Flack? She began her meteoric rise by sleeping with Russell Brand. Eventually she hit her partner over the head – whilst he slept – with a lava lamp.

She then did a lot of whining when she was fired from “Love Island”. I watched one episode (as a favour to my cousins daughter). It appears that “couples” talk about whether to **** one another.

I’d have looked forward to Flack’s critique of Wittgenstein.

Do remember that your first comment will be held in moderation until it is approved. There could be a delay. If you are having problems please contact me via the Contact Administration form and I will get back to you as soon as I can